I have felt for some time now that there is a lack of up- to-date walks that are based in and around Whitby. Therefore, it has been a labour of love to compile a wide range that should suit ALL needs. They all radiate from Whitby, some are entirely on foot and others utilise the excellent local public transport network to get to the start/finish points.

It would be nice to think that some money for charity could be raised from all of this one day … and only one really came to mind (and in the hearts of many Whitby folk) … the RNLI. However, I have no stomach for crossing the commercial and copyright minefield that would ensue (a massive thanks to Tony D for offering to help me with this anyway!) ... when all I want to do is produce high-quality walks!

For each walk, a leaflet has been produced (with colossal help from Wojciech!) containing relevant information / statistics / points of interest. All are accompanied by the route on the latest (1:25,000) digital mapping.

Compiling the points of interest seemed to take me an eternity to produce … 99% of research is discarded and only the relevant is extracted! I have the urge to tell every single minute detail about the area (it’s like trying to condense ‘War & Peace’ onto 1/2 page of foolscap!). The limited space I have does however discipline me to only deliver bite-sized pieces (manageable to read and digest during the walk). I do tend to dwell on one particular topic, pertinent to the route, for each walk. This has allowed me to build up a comprehensive insight, over the full series of leaflets, into this fascinating part of the world … I love the final result! 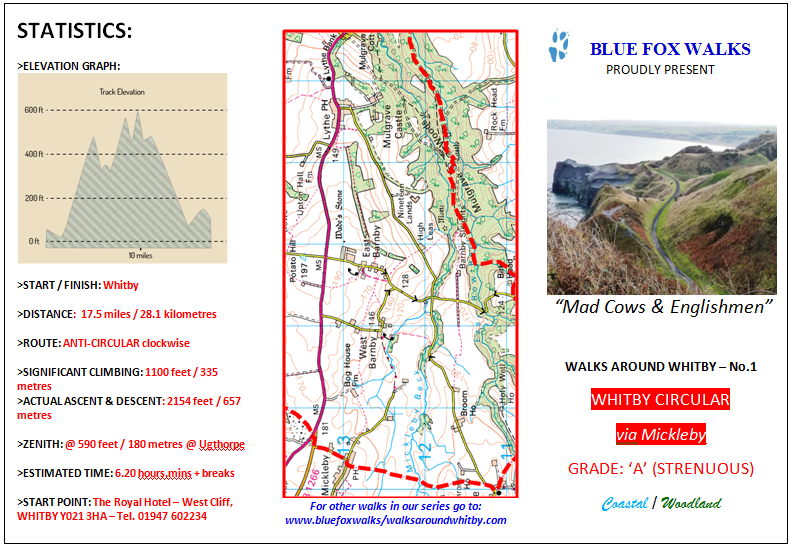 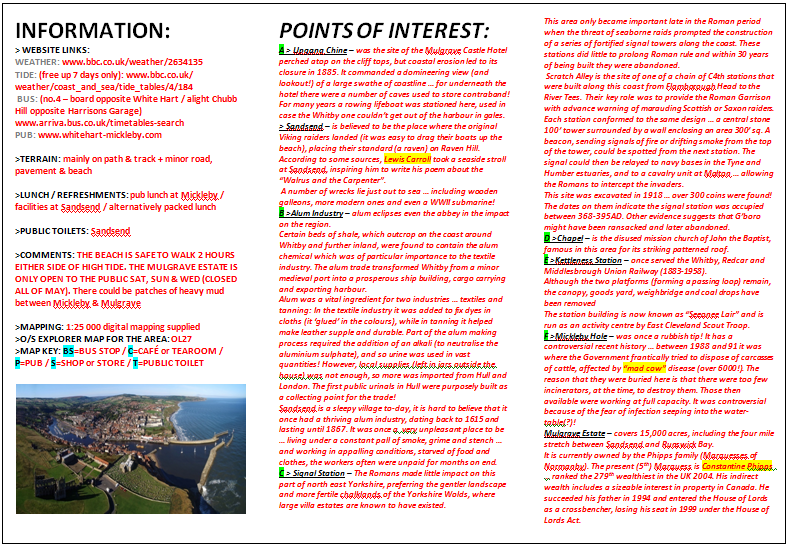 The lower the number, for EACH grade, the nearer to Whitby 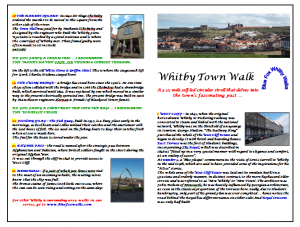 This is my take on this classic long-distance path. It is broken down into daily sections (of around 18 miles) and is crammed packed with up to date information, mapping and points of interest.

Grinkle Mine was an ironstone mine working the main Cleveland Seam. Initially, the ironstone was mined specifically for the furnaces at the Palmer Shipbuilders in Jarrow but later became independent of Palmers.

To enable the output from the mine to be exported, a three-mile narrow-gauge tramway was constructed … it ran across three viaducts and through two tunnels to a harbour at Port Mulgrave, where ships would transport the ore to Tyneside.

During WWI, the threat of wartime action on the harbour led to a connection being built from the mine site direct to the main Whitby to Loftus railway line just to the north of the mine head. Whilst this allowed for the closure of the port to shipping in 1917 (it was blown up!), the tramway stayed open to transport miners from Port Mulgrave to the mine site.

The mine first ceased production in 1921, with sporadic years of mining taking place. However, the mine was closed for good in 1930 and part of the site is now underneath the surface working of the more modern Boulby Potash Mine complex, though some buildings remain at ground level.

Our Walk … traces the course of the old tramway (over the tunnel sections). It starts in earnest deep inside Easington Woods and in the shadow of the giant Boulby Mine. Onto Ridge Lane, before dropping down into Roxby Woods and Dalehouse. Skirting Seaton Hall, the route heads for the clifftops before steeply descending down onto the beach at Port Mulgrave.

Whitby had already been connected to the national rail system via The Whitby and Pickering Railway since the 1830s.

The Whitby, Redcar & Middlesborough Union Railway was built between 1871 and 1886 and ran from Loftus to the River Esk at Whitby … connecting Middlesborough to Whitby along the coast.

For much of its journey, the line hugged the cliffs but had a troubled build, due to the proximity to the sea and the poor quality of the construction on many of its original bridges and viaducts. The line was closed to passengers in 1958, but the northern section to Boulby Potash Mine was re-opened in the 1970s. It was single track throughout, however, all stations (bar Sandsend) had passing loops.

Dwindling passengers ensued after the war years, the route was only popular during summer weekends. The line’s costs began to exceed revenue, this particularly applied to the viaducts and tunnels from Kettleness to Sandsend. In 1960 work began to dismantle the line, viaducts were sold for scrap metal and concrete was used in the construction of sea defences.

Our Walk … starts at Runswick Bay and faithfully follows the original line, along a relatively new ‘permissive path’ to Kettleness.

The finale takes in the beginning of the Cinder Track at Stakesby Vale and heads in the direction of Scarborough. Our line diverts off to the right (Prospect Hill Junction) to swing around in a semi-circle to go under Larpool Bridge and alongside the existing Esk Valley line. It is possible to trace the course, but DO NOT proceed beyond Larpool Bridge … to avoid trespassing!