Ticks and Lyme disease: what to do about tick bites 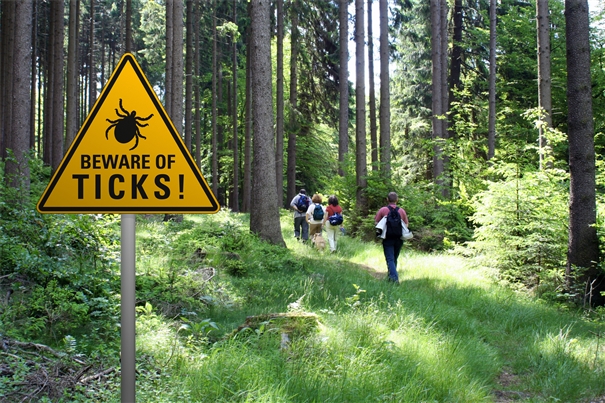 Be careful of ticks this summer. Photo: Shutterstock / Heiko Barth

Nasty critters that latch onto you, nobody likes coming home to find a tick with its head buried in your skin. So with cases of Lyme disease increasing in Europe, make sure you know what to do to prevent tick bites and how to safely remove ticks that are already attached.

Ticks are small arachnids that live by feeding on the blood of animals, particularly mammals, and can range in size from smaller than a poppy seed up to that of a pea, depending on the stage in its lifecycle and/or how engorged it is on blood. While a tick bite is itself generally harmless, they unfortunately are capable of transmitting diseases to humans, some of which can be extremely debilitating and life-threatening.

What diseases can ticks carry?

Three of the diseases that can be caught from a tick bite in Britain are:

Lyme borreliosis
More commonly known as Lyme disease, this disorder is caused by the bacteria called Borrelia Burgdorferi (Bb), and is carried by many infected ticks in popular UK and European walking and climbing areas. Fortunately not all ticks carry it and simply being bitten by a tick does not instantly mean you’ll contract Lyme disease – swift and proper removal is key to minimising risk of infection. The classic symptom of Lyme disease is a bull’s eye rash (erythema migrans) and shows up as a red ring of inflammation that gradually spreads out across the skin, often with a fading centre. It can appear from two to 40 days after infection; if you develop one be sure to photograph it to show your doctor. Not all infected people develop the rash, so be vigilant for other early symptoms that may develop, such as: feelings of tiredness, flu-like symptoms like chills, fever, headache, muscle and/or joint pain, swollen lymph glands, or blurred vision. Later stage symptoms include: arthritis in large joints, nerve problems such as numbness, facial palsy, meningitis with fever, stiff neck, and severe headache, memory problems and sometimes irregularities of the heart rhythm. 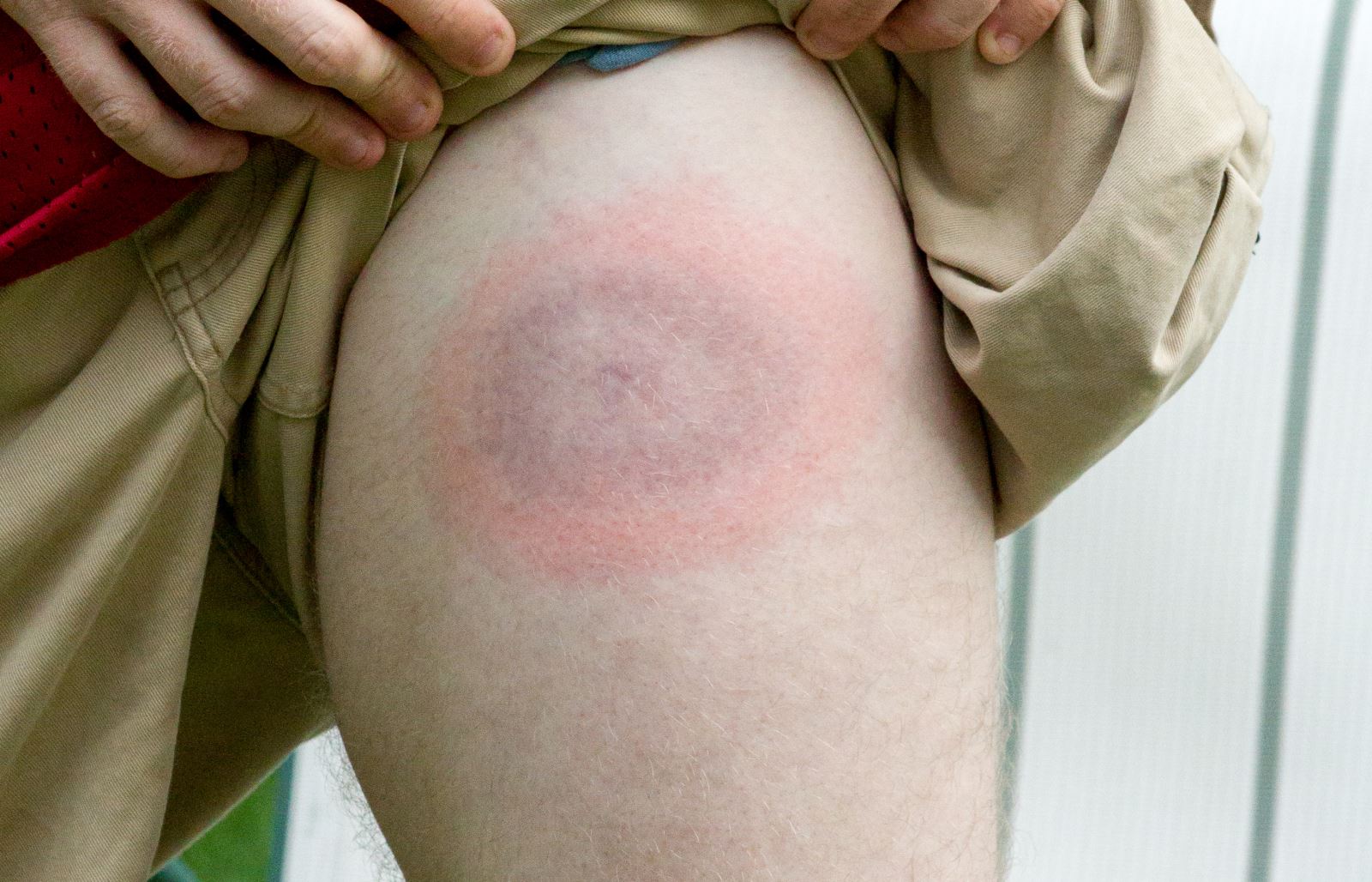 Babesiosis
Caused by the Babesia parasite, a protozoan organism similar to the malaria parasite, this organism attacks red blood cells and requires laboratory identification to diagnose infection. The most common symptoms are fever and anaemia, also tiredness, loss of appetite, and generally feeling unwell. Symptoms usually develop one to four weeks after a tick bite.

Ehrlichiosis
A bacterial disease that infects and kills white blood cells, diagnosis of the disease can be tricky and usually is based on symptoms coupled with evidence of tick exposure. Symptoms can develop anywhere between four days to 16 days after a bite and the most common are fever, headache, tiredness, muscle aches, nausea, vomiting, and some will develop a rash.

Another disease carried by ticks in Europe is Tick Borne Encephalitis (TBE) – a serious viral disease that can affect the central nervous system/brain. Ticks carrying the disease are often found in rural or forested areas in parts of Europe from late spring until early autumn. Early symptoms include flu-like illness and fever from six to 14 days after being bitten. Later symptoms will follow after a period of no symptoms, and may manifest as neck stiffness, severe headaches, photophobia, and signs of meningitis such as delirium or paralysis.

To join the BMC > https://www.thebmc.co.uk/membership

Walk skills: how to deal with ticks and midges 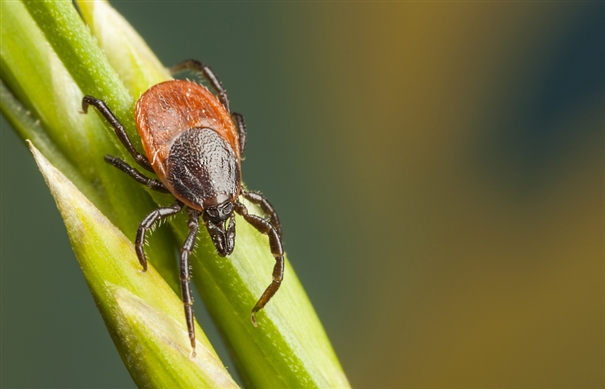 A close-up of a tick
Bites from Britain’s tiny tyrants can range from annoying to life-threatening. With summer holidays upon us, here are a few tips to avoid becoming a midge meal, or worse. Scotland’s midges are famous for their ability to send just about anyone into fits of flailing and cursing. But they are not the only bitey things you get in Britain: there are also sand-flies, stable flies, barn flies, black flies, mosquitos and leeches, to name a few. Britain’s insect population is booming as the climate warms; not only is the species mix changing as new species immigrate from abroad, but the population of ticks is believed to be increasing. Despite being tiny and often able to escape unnoticed, ticks are potentially one of the British countryside’s most serious biological hazards. Here are a few tips for dealing with the two insects you have to respect most as a walker or climber. It’s good to get close to nature, but that doesn’t mean you have to be eaten by it.

Midges are a misery-causing nuisance, but ticks are by far the bigger risk. Tiny arachnids, they lurk in vegetation like long grass and bracken, and stealthily latch on to the flesh of passing walkers to feed. 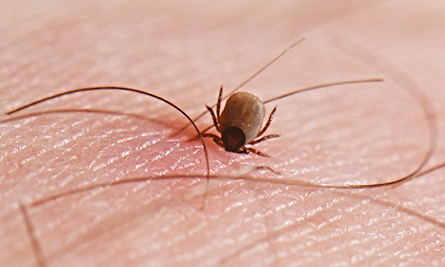 Often tick bites are harmless, but some of them carry debilitating and even life-threatening illnesses, including Lyme disease, which is difficult to diagnose and if left untreated can have severe and long-lasting symptoms. Tick-borne encephalitis is also spreading abroad, including some European countries. In rare cases, both diseases can be fatal. It sounds obvious, but prevention is much better than cure when it comes to ticks. Keep exposed flesh to a minimum when in long vegetation; gaiters and long-sleeved tops are useful. Ticks can lurk at any time of year (particularly in our increasingly unpredictable climate), but typically the high season is May to October. Always check your body for ticks after being in ‘tick country’. They can be as small as a poppy seed and possess an ability to get into the most unlikely of places, right up to the scalp and hairline, so be thorough. If you find one, don’t try and wrench, burn or suffocate it, as this can cause the tick to regurgitate into your blood. Specialist tick removal tools are simple to use and cheap to buy from most outdoor shops – check out an online video for how to use them.

The creature that reduces otherwise proud Scots to whimpering jessies might not seem like a big deal compared to the great apex predators of the world, but if you’ve ever been in Glen Coe or Torridon on a warm, still evening in June or July, floundering in an inescapable blizzard of midges, the prospect of being mauled by a bear might seem like a merciful escape. 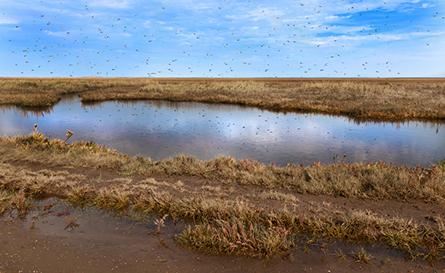 The most tried-and-tested, effective repellents for midges (and other insects) contain at least 50% DEET, but it comes with a strong chemical smell and potential irritation. Specialist non- DEET repellents include Autan, Smidge and Nordic Summer. There are various home remedies like Avon Skin So Soft, but the effectiveness of these seems to vary from person to person. Wearing a net over your head isn’t much fun, but midge nets are pretty much indispensable for summer camps in Scotland and can be picked up cheaply from most outdoor shops. Just make sure you get the ones designed for midges and not mosquitos, which have larger holes – you won’t make the same mistake twice. Midges strike when you’re stationary, so keep moving. Midges also hate wind – plan your lunch breaks for higher, exposed positions and camp in places with a bit of a breeze to keep them away. If you pitch a tent in a warm, cloudy glen next to a river… well, you only have yourself to blame.

Heather Morning is the Mountain Safety Advisor for the Mountaineering Council of Scotland. Q. When does the midge season start and end? A. June to September are the high risk months. That said, if you hang out in a sheltered damp glen in May you might experience the first ‘delights’ of the season. Q. How seriously should we take ticks? A. Extremely! In comparison to midges, these are the devil. Midges might give you an irritating itch or an annoying rash, but ticks carry insidious life-threatening diseases if not caught early. If you have been in tick country, which could be anywhere in the British countryside and mountains, then it is well worth checking yourself for any unwanted guests. If spotted and removed early, ticks pose very little risk. If they are left attached, particularly for more than 24 hours, they may have had time to transmit Lyme disease or another nasty tick-borne disease into your blood stream. Q. How do ticks get into such weird and unexpected places? A. These canny wee devils have the ability to jump off vegetation onto your clothing and then travel up your trousers, cranking out climbing moves which we can only be envious of. They can appear days after your visit to the great outdoors by lurking in clothing, on car seats and pets. Prevention is always going to be better than cure.

To join the BMC > https://www.thebmc.co.uk/membership 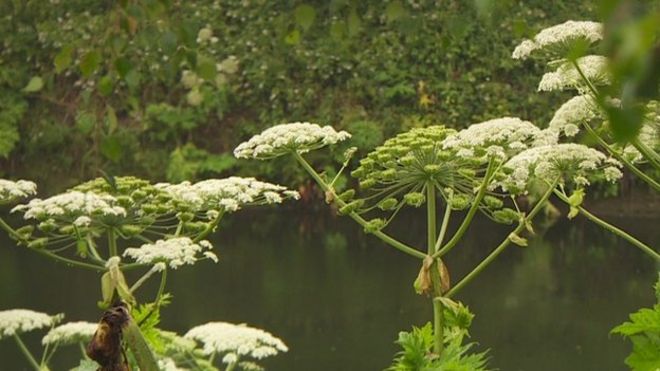 Giant hogweed, which grows near canals and rivers, can grow about 16ft (5m) high!

A rivers expert has called a harmful weed “the most dangerous plant in Britain” after two children were left needing hospital treatment. Mike Duddy, of the Mersey Basin Rivers Trust, said giant hogweed was a “massive issue” which needed tackling. Toxic sap from the weed, which grows near canals and rivers, can increase the sensitivity of the skin to sunlight, often leading to burns. Two boys were hurt after they touched the plant at a country park in Bolton. He said: “If you don’t know what the plant is, it’s exceedingly dangerous. It is now, without a shadow of a doubt, the most dangerous plant in Britain.

“There were originally a few hotspots of plants, but it has now spread to Bury, Bolton, Chinley, Stockport on the River Mersey – different parts of the canal system.” Mersey Basin Rivers Trust said the plant can be controlled with a herbicide, but due to a lack of a “multi-agency strategy” for dealing with it the problem was getting worse. After contact with the plant, the burns can last for several months and the skin can remain sensitive to light for many years. The NHS says anyone who touches giant hogweed should wash the affected area with soap and water, and keep it covered.

What is giant hogweed?